Multiple reliable accounts of Combs’ dedication to white supremacist ideology throughout the 80’s and 90’s were published in a 1996 article in The Morning Call. And while a 1997 internal investigation verified several of these claims, the APD declined to terminate Combs, instead prompting him to attend “sensitivity training.” Combs remained employed by Allentown Police Department (APD) until his retirement in 2002. Despite Combs’ verified history of white supremacy, he was again hired in 2010 by the Borough of Minersville to serve as Police Chief.

In the following article, CROH will lay out the various credible allegations against Combs regarding his open support for Hitler, Nazism, and other white supremacist ideologies. We will also discuss APD’s 1997 Internal Affairs Investigation into Combs (i.e. APD’s investigation of themselves). Lastly, we will cover Combs’ 2010 transition to Police Chief in the Borough of Minersville, a small community in Schuylkill County, Pennsylvania.

A 1996 Morning Call Article Outlines Michael Combs’ Overt Affinity for Hitler, Nazis, and the KKK

In November of 1996, local news outlet “The Morning Call” released a story outlining Michael P. Combs’ long history of advocacy for Nazism and white supremacist ideology inside the Allentown Police Department. Below is a summary of some of their findings:

In the article, Combs’ former partner, Ronald Manescu, accused him of regularly wearing a swastika pin on his uniform. According to Manescu, this pin led to a confrontation with a black community member that led to that man’s arrest.

Manescu claimed that during patrols in the 80’s, Combs complained that he could not arrest community members for “standing around and being black.” Manescu alleged further that Combs provided him with white supremacist literature and membership applications for white supremacist organizations. According to Manescu, Combs made it quite clear that he personally endorsed white supremacist ideology:

Combs’ Nazism was common knowledge in the Allentown police department. In 1990, the rumors about Michael Combs’ Hitler, Nazi, and KKK-decorated office were confirmed by several Morning Call reporters. The Morning Call reporters made a call to Allentown’s then-Chief of Police Wayne Stephens. Now with media paying attention to Combs’ Nazism, the Police Chief was forced to confront Combs:

According to then-Chief Stephens, he responded by verbally reprimanding  Combs, to which Combs initially responded with laughter. Despite then-Chief Stephens’ understanding of the obvious — that Allentown residents could not possibly trust a department that protects Nazis in their ranks — he did not initiate any further accountability process, investigation, nor punishment for Michael Combs in relation to this 1990 incident.

In the early 90’s, then-Assistant District Attorney Maria Dantos confronted Combs about the Adolf Hitler bust in his office, to which Combs responded by denying the holocaust and praising Adolf Hitler. Dantos described Combs’ suggestion that he merely praised Hitler’s economic achievements as “laughable.” According to then-DA Dantos, in regard to Combs’ endorsement of Hitler, “there was no misunderstanding.”

While CROH stands in firm opposition to repressive federal forces such as the FBI, we accept the findings of a 2006 FBI report on the widespread infiltration of law enforcement by white supremacists in the so-called United States. Former Allentown Police Officer Michael Combs is one of these white supremacists.

The entire decade of the 1980’s and into the early 1990’s, Michael Combs decorated his office with Hitler, Nazi, KKK, and other white supremacist imagery and propaganda. Only after the 1996 Morning Call article outlined above did APD open an investigation.

The boldness with which Combs openly displayed his white supremacist leanings in his APD office — and the years of inaction on the part of his fellow officers to address his open Nazism — serves as a sweeping indictment of the Allentown Police Department as a whole.

APD Internal Affairs Investigation Verifies Several of The Morning Call’s Claims in May 1997, But Declines to Terminate Combs, Instead Recommending “Sensitivity Training”

Beginning in December 1996 and concluding in May 1997, the Allentown Police Department investigated then-Captain Michael Combs. The investigation led to a report (which we encourage you to read in full) that identified 11 discrete claims against Combs. Each claim was investigated and the conclusions were placed into one of 3 categories — SUSTAINED, NOT SUSTAINED, or UNFOUNDED.

The conclusions for each claim were questionable at best. Inconsistencies and hypocrisies force CROH to take the internal investigation with a heavy grain of salt. It seemed that wherever possible, an incredible amount of unjustified goodwill was extended to Combs. For example, claim #1 reads:

“01) Did Captain Michael P. Combs wear a Nazi swastika pin on his Allentown Police uniform while acting in his capacity as an Allentown police officer?”

The report labeled this claim NOT SUSTAINED despite the report itself listing 4 current or former police officers who attested that Michael Combs did wear a swastika pin on his uniform during the 1980’s.

This is just one of multiple occasions in the document when (1) a claim is investigated, (2) one or more witnesses support that claim, and (3) the claim is inexplicably disregarded. The same logical gymnastics were used in relation to Combs’ alleged sharing of white supremacist literature with fellow police officers. Two police officers stated that Combs gave them white supremacist literature. Yet the claim was (perplexingly) labeled NOT SUSTAINED.

Another glaring inconsistency is this section from APD’s internal investigation:

“There would always be a possibility that a patrolman would come in contact with someone that would be extremely offended by a swastika pin, yet there is no documentation of that ever occurring.”

Now recall that important detail from the 1996 Morning Call article. Officer Manescu DID assert that he arrested a man who became agitated after seeing Combs’ swastika pin. And DA Santos certainly had words for Michael Combs as recently as the early 1990’s. What remains unstated is that the lack of a paper trail has always been the intention. Someone doesn’t like the swastika pin? Arrest them. Journalists or a DA sees the Adolf Hitler bust? Give Combs a firm talking-to and brush it under the rug.

Notably, even within the context of an internal investigation carried out by a Police Department that does not want to embarrass itself, the Allentown PD substantiated 3 of the 11 claims from the Morning Call article:

Any one of these items should be disqualifying for public service. But #9 is a real doozy, and something we haven’t yet discussed. And the details reveal more contradictions and blind goodwill on the part of APD investigators toward Michael Combs. Combs admitted openly to attending multiple meetings and rallies for white supremacist organizations while employed by Allentown Police Department. Combs claimed that he only attended these events for the purpose of collecting intel. This alibi doesn’t hold weight, however. Again from the 1996 Morning Call article:

APD never sent their officers into the meetings of white supremacist organizations. And if they did, they wouldn’t have sent a high-ranking supervisor like Michael Combs. The context provided by Combs’ then-superiors Stephens and Monahan, paired with all the other allegations of support for Hitler, Nazis, and the KKK by other colleagues, implies heavily that Combs’ excuses cannot be taken at face value. He certainly didn’t attend white supremacist meetings to gather intel. It is far more likely that he attended them of his own volition because he is a white supremacist.

The investigation concludes with a note from the authors. Despite the dire nature of the allegations, several of which their investigation substantiated, they write:

What’s more astonishing; Michael Combs kept his job. He was not punished at all, save a short stint at “sensitivity training” ordered by then-Mayor William L. Heydt and then-Chief Gerald Monahan Jr. Even in a profession rotted with injustice from top to bottom, this outcome was uniquely inadequate. APD — whether out of self-preservation or out of some tribal dedication to defending their own — denied the obvious, and allowed a Nazi a twenty-five year career on its police force.

In April of 2002, Tony Phillips — a black police officer at APD, and one of the four people who claimed Michael Combs wore a swastika pin on his uniform in the 1980’s — sued the City of Allentown (the technical employer of all Allentown Police) on the grounds of racial discrimination. Cited in the lawsuit were Phillips’ allegations against Michael Combs, as well as the outcome of the 1997 Internal Affairs investigation into Combs.

This lawsuit brought renewed attention to Michael Combs not-so-distant past of holocaust denial and Hitler-admiration. One month later (in May of 2002), Michael Combs retired from the APD a 25-year veteran. Unfortunately, this was not the end of Michael Combs’ career in law enforcement.

In January of 2010, Michael Combs was chosen among a large field of candidates to be the next Police Chief of Minersville, Pennsylvania. Minersville is a small Borough located in Schuylkill County, about an hour west of Allentown, Pennsylvania.

We were unable to find any primary sources indicating concern on the part of Minersville Borough Council in relation to Michael Combs’ history of white supremacist bigotry. Considering how a simple google search of “Michael Combs police” yields multiple results that document his past endorsement of Hitler and Nazism, CROH struggles to believe that Minersville Borough Council members were unaware of his history. Despite this, Michael Combs was chosen among a large pool of candidates. At the time of this article’s publication in 2021, Combs has been the Police Chief of Minersville for over a decade.

Michael Combs Is (& Has Always Been) a Nazi 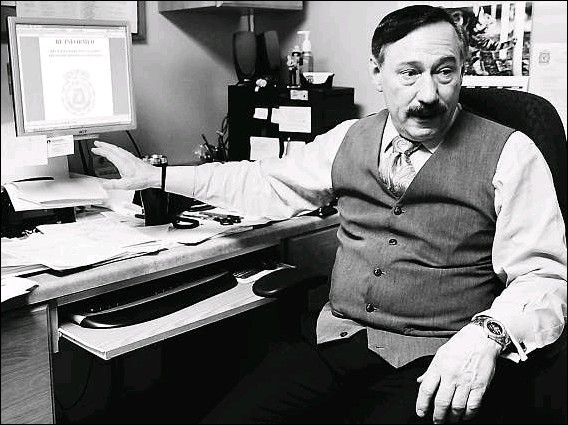 It is sincerely disturbing that Michael Combs has never been held to account for his blatant advocacy of Nazism and white supremacy while on duty as an Allentown Police Officer. Even when it was confirmed by a District Attorney, two journalists, and multiple of Combs’ colleagues, the outcome was grossly inadequate sensitivity training. He stayed on the force for another five years, and was allowed to retire with a pension in 2002. Not only was he never punished, but he was rewarded again in 2010, when he became the most senior law enforcement official in the Borough of Minersville.

Minersville Police Chief Michael Combs is a Nazi. The so-called “Justice System” has shown it will not hold him accountable. Therefore — in the interest of community safety — we’ve compiled this article. We keep us safe.