On January 6, Jason Moorehead, a social studies teacher at Raub Middle School in Allentown and Woman’s Row Coach for Lehigh University, took a photo of himself at the “Stop the Steal” rally that incited the deadly fascist riot at the Capitol Building later that day. A picture shows Moorehead in a MAGA hat and waving a yet unidentified flag. Later that day he boosted a post that made light of the storming of the Capitol Building.

The next day, Allentown School District Superintendent Thomas Parker announced in a letter the suspension of an unnamed staff member who was “involved in the electoral college protest that took place at the United States Capitol Building on January 6, 2021.” Moorehead has since been confirmed to be that unnamed staff member.

Moorehead quickly lawyered up in order to challenge the suspension. On January 23, Moorehead and his lawyer were given a national platform by Michael Smerconish on CNN. Moorehead claims that he was no closer than a mile away from the Capitol Building and didn’t break any laws that day. His lawyer, Francis Malofiy, argued that Moorehead’s First Amendment rights are being violated. On January 28, Moorehead’s supporters organized a call-in to the Allentown School District Board Meeting asking for him to be reinstated, one person comparing his plight to the victims of Nazi Germany. 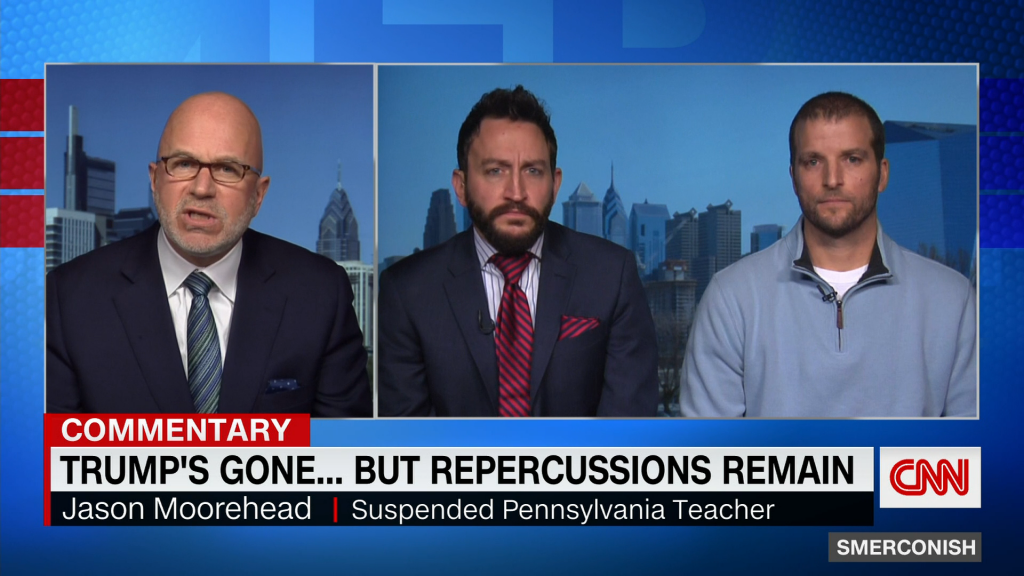 Moorehead and his sycophants miss the point, of course. No one denies that Moorehead has the right to free speech and assembly, but that doesn’t necessarily translate into employment protections. The fact of the matter is that Jason Moorehead is either a willing and knowing participant in a fascist political movement, or he is wholly unqualified to teach middle school social studies. Whether the former or the latter is true, he does not belong in an Allentown classroom. The safety, educational development, and rights of the students are fundamental to the operation of Allentown School District. Moorehead’s employment as a teacher disrupts the school district’s ability to maintain a safe learning environment for the students of Allentown.

The events of January 6 have proven beyond a shadow of doubt that the US is under siege by an ascending fascist movement. Robert Paxton, historian and author of The Anatomy of Fascism, has long been criticized from those on the left for refusing to call Trump a fascist. After the 6th, he now agrees that Trumpism fits his definition of fascism.

Trump’s incitement of the invasion of the Capitol on January 6, 2020 removes my objection to the fascist label. His open encouragement of civic violence to overturn an election crosses a red line. The label now seems not just acceptable but necessary.

Paxton compares the events of January 6th to the fascist riot on the Place de la Concorde in Paris on February 6, 1934. The fascists there tried to storm the National Assembly but were fired on by police. Many of the rioters went on to undermine French resistance to Nazi Germany and later became functionaries within the collaborationist Vichy regime.

Nice, Normal People Can Be Fascists

In 1955, the Jewish-American journalist Milton Mayer published They Thought They Were Free, his personal account of his interviews with 10 low-ranking Nazi Party men from the State of Hesse. Milton’s choice to exclude women from his interviews (women could not be party members) and his focus on the most conservative region of Germany has since drawn some criticism, but his account still manages to be immensely educational. It gives us a look at the self-described “little” Nazis. Many of these fascists were not all that moved by a rabid hatred of Jews or dreams of world domination. But they did see the obvious personal advantage of an economic and social order that catered to them at the expense of others.

These were “nice, normal people.” The small business owner, the rank-and-file state functionary. These were not the people who would guard the death camps, but nonetheless they realized loyalty to the Nazis was in their best interest, at least in the short term. Eventually, it became evident that the economic boom these little Nazis were benefiting from was merely a run up to an incredibly destructive, expansionist war.

World War II lead to the deaths of 7 million Germans, 6 million Jews, 5.7 million Russian civilians, 1.8 million Polish civilians, 312,000 Serb civilians, 250,000 Roma, 250,000 people with disabilities, and 291,557 in armed service of the United States of America. Germany was divided in two for the first time since German unification in 1871. The German people were ravaged, and no one deserved more blame for the destruction of the German people than the Nazi Party itself. The war was hopeless well before 1945. The high command of the military tried to kill Hitler the year before. He had let Germany be bombed to dust for nothing. Hitler’s claims to love the German people turned out to be lies after all.

For an easily digestible summary of Mayer’s book, see Part 1 of “How Nice, Normal People Made the Holocaust Possible” on the “Behind the Bastards” podcast by Robert Evans.

Students Have Rights Too

In the CNN interview, Moorehead claims that he doesn’t bring his politics into the classroom and teaches his students to be “critical thinkers.” It is our opinion that Jason Moorehead forfeited his reputation as an authority on critical thought when he participated in a fascist rally one mile away from where a contested election was being certified.

How are the people of Allentown, the majority of whom are people of color, supposed to trust this man with authority over their children? We all know what he supports. We understand the role that white supremacy plays in the school-to-prison pipeline.

Jason Moorehead teaches social studies. He has a bachelor’s in political science and a master’s in secondary education. So he has no excuse to play dumb about what he did. He participated in a fascist rally-turned-riot in Washington, D.C. He’s not the victim. He used his freedom of speech and assembly to prove to the parents of Allentown that he is a danger to their children. Jason needs to suffer the appropriate consequences for his behavior. The Allentown School Board needs to do everything in its power to remove Moorehead from his teaching position, and ensure he never instructs Allentown students again.