Gerard Stezelberger of Slatington, PA is known to most as the owner of Relic Hunter Firing Line, a gun shop and shooting range in the Lehigh Valley. However, most Lehigh Valley residents are not familiar with the shop’s origin story. Namely, that Relic Hunter Firing Line was funded by Stezelberger’s online business RelicHunter.com, a major distributor of authentic Nazi gear.

Viewing RelicHunter.com on the Internet Archive, we can see that Stezelberger’s web site explicitly specialized in selling Nazi memorabilia from 2003 until 2016. A deeper dive reveals that Relic Hunter was a high-volume online store. Old Nazi memorabilia was constantly going out the door, and was quickly replaced by more.

As for Stezelberger’s reason for selling Nazi gear, he claims in a 2006 capture of RelicHunter.com, “We’re first and foremost collectors… We’ve decided to become sellers, because of the lack of quality ORIGINAL items we see in the market.” He possessed so many Nazi hats, uniforms, posters, and daggers, that he felt personally responsible to start a business and ensure everyone have access to “quality” Nazi items.

Despite Stezelberger’s supposed commitment to providing original Nazi collectibles, a 2016 forum thread on MilitariaCollectors.Network details concerns about counterfeit Nazi gear. One commenter spoke to Relic Hunter’s notoriety as a dealer of Nazi memorabilia, and referenced Stezelberger as a “downright bent crook.” In CROH’s opinion, making money as a dealer of Nazi wares is deeply unethical, period. But it’s interesting that even among the unscrupulous bunch who buy and sell those Nazi wares, Gerard Stezelberger could be called a “crook.”

Rather than using his well-established website RelicHunter.com, Gerard registered RelicHunterFirearms.com for his new shop. This move created a level of separation between Stezelberger’s old Nazi business and his new Firearms/military surplus business. Perhaps Stezelberger recognized that Lehigh Valley residents would rightly question the integrity of a person who makes a living selling actual, literal, Nazi keepsakes.

In September of 2017, Stezelberger closed the MacArthur Road shop and reopened at the current Relic Hunter location on Egypt Road in Coplay. Newly rebranded as Relic Hunter Firing Line, Stezelberger stopped updating the old, Nazi-focused Facebook page. At this juncture it appears that Stezelberger finally removed his Nazi memorabilia website from the internet. All internet traffic from late 2017 and onward is directed to Stezelberger’s new firearms website. No mention of Relic Hunter’s origins as a notable dealer of Nazi gear.

In regard to political affiliation, Stezelberger found his roots in the 9-12 Project, a defunct right-wing political project that saw heavy overlap with the Tea Party. We confirmed Stezelberger’s involvement in the 9-12 Project based on his short-lived Twitter profile from 2009, as well as images displayed on RelicHunter.com in 2010. More recently, Stezelberger has been photographed at events hosted by the Lehigh Valley Tea Party, where his employee Maureen “Mo” Gyory serves as Board Member.

A more or less straight line can be drawn between the 9-12 Project, the Tea Party movement, and the Patriot and MAGA movements that we see today. RelicHunter.com and their related social media accounts act as a perfect microcosm of this trend.

The Relic Hunter website circa 2005 displayed elements of hyper-nationalism and support for the Bush administration’s imperialist “War on Terror.” By 2009, Stezelberger was attempting to tweet at Glenn Beck and attending right-wing rallies in DC. For all of 2016-2020, his business’ social media platforms were directly aligned with the MAGA movement, and constantly fear-mongered over BLM protests.

In his work Anatomy of Fascism, Robert Paxton defines fascism as:

“…a form of political behavior marked by obsessive preoccupation with community decline, humiliation, or victim-hood and by compensatory cults of unity, energy, and purity, in which a massed-based party of committed nationalist militants, working in uneasy but effective collaboration with traditional elites, abandons democratic liberties and pursues with redemptive violence and without ethical or legal restraints goals of internal cleansing and external expansion.”

The section in bold highlights the role Gerard Stezelberger and his business Relic Hunter play in Lehigh Valley far-Right organizing circles. In the past few years, Stezelberger held Second Amendment rallies and meet-the-candidate nights for GOP politicians such as Lisa Scheller. He also agitated violent reactionaries into targeting a press release and pick-up basketball game held by local teenagers (an event organized in response to an incident of police brutality at the teenagers’ high school).

Stezelberger pens opinions and is frequently quoted in The Morning Call and WFMZ. He also uses his online platforms to spread the debunked conspiracy theory that Trump won the 2020 Presidential Election. A delusion that climaxed in Stezelberger recruiting dozens of of Lehigh Valley residents and personally bussing them to DC to participate in the fascist rally-turned-riot of January 6th, 2021.

In short, Relic Hunter is a place where the whole spectrum of Lehigh Valley’s far-Right rub elbows. Stezelberger may not be a Proud Boy, but that doesn’t make him any less dangerous. As we covered in our recent article on J6 attendee and Raub Middle School teacher Jason Moorehead, “nice, normal people can be fascists.” Stezelberger’s connections to traditional GOP elites, Tea Party activists, local media outlets, and full-on Qanon conspiracy theorists (such as Lisa Scheller campaign Field Director and fellow J6 attendee Steve Lynch) creates fertile ground for these groups to work in “uneasy but effective collaboration” to achieve fascist ends.

In the weeks approaching the Capitol Riot, Stezelberger posted to the Relic Hunter Facebook page inviting customers to join their bus trip to the J6 “Stop the Steal” rally in DC. On January 5th, Stezelberger was featured in a WFMZ segment and news article confirming his intention to “close up shop and head down to D.C. for the day on a bus trip with family, friends, customers and employees.”

On the same day, Stezelberger posted to Relic Hunter’s Facebook page, “Going to Washington, DC to support President Trump. Will reopen Thursday morning.” In the comments on this post and another post from January 7th, five of Relic Hunter’s Facebook followers confirmed that they attended the J6 rally-turned-riot. Their names are Matt Vanderhoff, Steve Lynch, Justin Wehr, Bill Shafer, and Laura Warmkessel. (full screencaps of both the 1/5/21 and 1/7/21 posts can be viewed at the very bottom of this article)

Maureen “Mo” Gyory was one of the Lehigh Valley residents who joined Stezelberger on his bus charter. In a December 26 post captured from Gyory’s Facebook, “Mo” and her husband’s violent intentions for January 6th are quite clear. And in another screenshot captured from Gyory’s Facebook profile, Mo confirms that while she did not breach the Capitol building herself, her friends did. Birds of a feather. 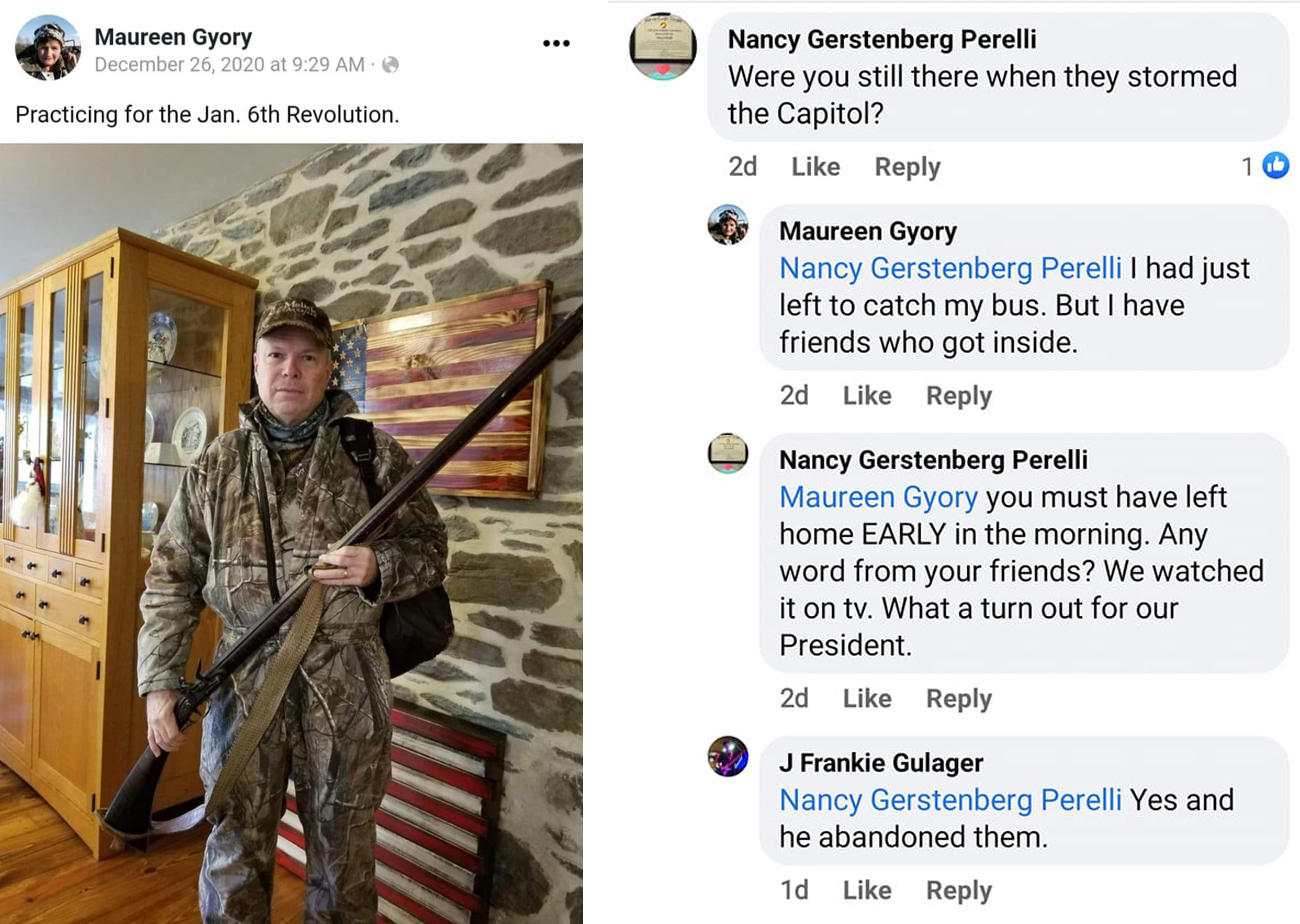 Gerard Stezelberger has been organizing with far-Right groups for over a decade. He built a comfortable upper-middle class life selling Nazi relics to private buyers. He used his platform to intimidate and endanger our community’s children. So far, his reputation as “successful Lehigh Valley business owner” has shielded him from criticism. But the events of J6 have dispelled any lingering debate about the fascist character of the MAGA movement. Gerard Stezelberger did everything in his power to strengthen fascist numbers in DC for the deadly Capitol riot. And as a result, bears significant responsibility for the all-too predictable violence that his peers carried out.

In the interest of community safety, we compiled this article, as well as the information below.